Astronomy as an example for an open science

When a former Max Planck colleague who now works at the Stifterverband, a public-private think-tank, called me in October and asked if I wanted to take part in a workshop about open science, I was unsure what astronomy could offer in this regard. However, when simply writing up the tools and processes many astronomers use (and take for granted), it quickly becomes clear that astronomy is very much an open science already.

In the spirit of open science, I would like to document here my preparation for the discussion section of the workshop tomorrow.

What does openness in astronomy mean? 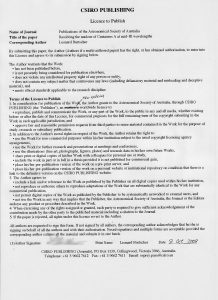 Example of a modified copyright agreement granting only a non-exclusive license to the publisher and thus allowing to publish my own article on my homepage or on preprint servers.

Why do we promote open-ness in astronomy?

Astronomy is a highly competitive field (typically only one out of 20 astronomy Ph.D.s eventually gets a tenured research position). Open-ness in astronomy would not be supported if it weren’t also promoting competitiveness and productivity.

I am interested to see the discussion tomorrow and will report back with a view from the other participants / fields as well!

This website uses cookies to improve your experience while you navigate through the website. Out of these, the cookies that are categorized as necessary are stored on your browser as they are essential for the working of basic functionalities of the website. We also use third-party cookies that help us analyze and understand how you use this website. These cookies will be stored in your browser only with your consent. You also have the option to opt-out of these cookies. But opting out of some of these cookies may affect your browsing experience.
Necessary Always Enabled
Necessary cookies are absolutely essential for the website to function properly. This category only includes cookies that ensures basic functionalities and security features of the website. These cookies do not store any personal information.
Non-necessary
Any cookies that may not be particularly necessary for the website to function and is used specifically to collect user personal data via analytics, ads, other embedded contents are termed as non-necessary cookies. It is mandatory to procure user consent prior to running these cookies on your website.
SAVE & ACCEPT