METIS is the Mid-infrared ELT Imager and Spectrograph, one of the three first-generation instruments for ESO’s Extremely Large Telescope. It features imaging and medium-resolution long-slit spectroscopy in the thermal L (~3.45 µm), M (~4.75 µm) and N (~10 µm) bands. METIS will additionally provide integral-field spectroscopy in the L and M bands and various high-contrast imaging techniques in all bands. With its internal single-conjugate adaptive optics system it will reach the ELT’s diffraction-limit (ca. 20 milli-arcseconds at L band) in order to characterise Earth-like exoplanets, star-forming regions and the dusty environments of active galaxies, among many other applications. It is being built by an international consortium led by the Dutch astronomy organisation NOVA (PI: Bernhard Brandl) at the Observatory of Leiden University.

As calibration scientist, my role is to devise a strategy to calibrate all observing modes of the instrument in a way that satisfies the scientific requirements on precision while also making sure that we spend as much as possible of the expensive ELT time on science targets on sky.

Besides calibration, one of the biggest challenges that I work on, is the removal of the thermal background and we are investigating various ways to improve on the classical chopping/nodding scheme using current mid-infrared instrumentation, in particular the VISIR instrument at the VLT. 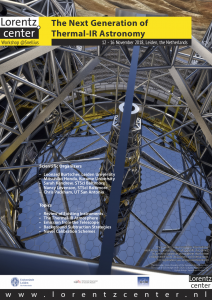 In November 2018 we hosted the Lorentz Center workshop “The next generation of thermal-IR astronomy: How can we reach the photon noise limit?”. We brought together a large part of the global thermal-IR community (including experts from Subaru/Comics, Gemini/T-ReCS, VLT/VISIR, UKIRT/Michelle, SOFIA, LBT/LMIRcam, GranTeCan/CanariCam, TAO, VLTI/MATISSE, VLT/NEAR, Gemini-South/TIKI and the next-generation instruments ELT/METIS and TMT/MICHI. After a review of the current instruments, we looked into some specific problems and how to solve them for the next generation instruments. This included chopping/nodding residuals, drift scanning and an investigation into what timescales are the most relevant for detector, telescope and atmospheric variations. 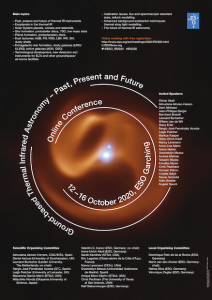 In October 2020 I co-organised the fully online follow-up conference “Ground-based thermal infrared astronomy – past, present and future“, sponsored by ESO Garching. The conference included talks about nearly all astronomical objects that can be observed in the thermal-infrared. It also included talks and discussions about technical and societal aspects of our domain. This online ESO workshop was followed by over 300 people from nearly all over the world. Most talks can still be watched online in our YouTube channel and the presentation files can be downloaded from our Zenodo repository (where they can also be found via ADS). A summary article appeared in the June 2021 issue of the ESO messenger.

MATISSE is the Multi Aperture Mid-Infrared Spectroscopy Experiment, one of two second-generation instruments of the VLTI (the other one is GRAVITY, see below…) that has very recently (October 2017) arrived on Paranal for commissioning. It combines the light of all four Unit Telescopes (8.2 m) or Auxiliary Telescopes (1.8 m) in the mid-infrared L/M/N bands (ca. 3-12 µm). By doing so, it will be sensitive to structures as compact as ca. 3 milli-arcseconds (in L band). Its imaging resolution is six times higher than what will be possible with the ELT and METIS in the mid-2020s! But of course this “trick” comes at a price: MATISSE will only be sensitive to the infrared-brightest objects on sky and not directly retrieve images, but interferometric quantities (visibilities, closure phases). Reconstructing images – and ultimately testing astrophysical scenarios – with these is a very interesting technical and astrophysical challenge. The predecessor instrument MIDI (see below) has enabled us to change our view of the nuclear dusty accretion structure (the “AGN torus”) and we expect no less than that from MATISSE.

MATISSE has been is available for observations only since recently; check out the MATISSE blog for reports from the assembly and commissioning of the instrument on Paranal. The highlights from commissioning are summarised in an SPIE proceedings article. Apart from commissioning, I contributed to a new calibration catalogue (Cruzalèbes et al. 2019) and in a Ph.D. research project we are studying the AGN-heated dust in the nearby active galaxy NGC 1068.

During my first postdoc at MPE (2012-2015) I was in charge of the Observing Software for GRAVITY, as well as a number of other things. GRAVITY is an upcoming “second-generation” interferometer for the VLTI. It will offer microarcsecond astrometry and phase-referenced imaging. Its main science case is to study the Galactic Center where it will enable us to trace the motion of gas blobs very close to the event horizon of the super-massive black hole there. Apart from this, GRAVITY will also allow us to resolve spectro-astrometrically the so called broad line region in AGNs and tackle the question of the geometry of this region. These broad emission lines are used to estimate black hole masses throughout the universe and the geometry of this region is the major uncertainty in this estimate. I am responsible for the Observation Software of GRAVITY which includes writing the scripts that will eventually control the entire observing sequence, from acquisition to observation and calibration. A recent overview of the instrument software was published in the SPIE proceedings and the poster version shows all components of the GRAVITY instrument software at a glance: During my Ph.D. at the Max-Planck-Instiut für Astronomie in Heidelberg, I developed an observational strategy and co-developed and characterized an analysis method for very faint targets. Among other things, this required an upgraded data reduction software (EWS, lead developer is Walter Jaffe in Leiden) taking into account the fact that in faint sources there is not enough signal per frame to recover the group delay. This is shown in the two plots below:

Apart from the upgraded software, the analysis of faint sources also required extensive testing and characterization. Among other things, we used observations of bright calibrators as a reference, mixed those observations with plenty of noise to create artificial faint sources and then measured how well we are able to reconstruct the intrinsic (and in this case known) signal using various methods. The most relevant of these tests and their application to actual science data are summarized in this invited SPIE contribution.

During my work with MIDI and the data reduction package EWS, I developed a number of tools (in IDL, which was the language of the trade at the time…). They are available at this github repository. Also, a lot of “wisdom” is collected in the MIDI wiki.

Already during my school time, I was interested in astronomical “instrumentation” (although of course I didn’t refer to it like that at the time…). In the 12th grade (age 17) I produced this report about a project using the school observatory’s CCD camera, a SBIG ST-5C.

This website uses cookies to improve your experience while you navigate through the website. Out of these, the cookies that are categorized as necessary are stored on your browser as they are essential for the working of basic functionalities of the website. We also use third-party cookies that help us analyze and understand how you use this website. These cookies will be stored in your browser only with your consent. You also have the option to opt-out of these cookies. But opting out of some of these cookies may affect your browsing experience.
Necessary Always Enabled
Necessary cookies are absolutely essential for the website to function properly. This category only includes cookies that ensures basic functionalities and security features of the website. These cookies do not store any personal information.
Non-necessary
Any cookies that may not be particularly necessary for the website to function and is used specifically to collect user personal data via analytics, ads, other embedded contents are termed as non-necessary cookies. It is mandatory to procure user consent prior to running these cookies on your website.
SAVE & ACCEPT