Home » Astronomy and the climate crisis

Astronomy and the climate crisis

Astronomy is not just the study of other celestial objects like planets, stars and galaxies. It also serves to reflect upon our own world. Images such as the iconic Earthrise and the Pale Blue Dot are awe-inspiring symbols for the uniqueness and fragility of Earth, “the only home we’ve ever known”, as Carl Sagan wrote in his book (1997) with the same title. It is still true today despite more than 4000 known extrasolar worlds. There is no other world for us. In my view, this simple and powerful revelation is the single most important contribution that astronomy can bring to society. I am convinced that fully embracing this view will lead to a better world: We must protect Earth and preserve it for future generations. We must treat the human-made climate crisis as the serious threat that it is and immediately and significantly reduce the emissions of greenhouse gases.

In recent times I have therefore initiated and contributed to a number of activities around the globe to promote this idea and help fight against the climate crisis using the astronomical perspective. 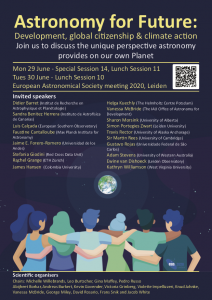 Within the context of the European Astronomical Society Annual Meeting (June 2020, online), my colleagues and I are organising a number of sessions on “Astronomy for Future”.

Together with a large number of colleagues world-wide (currently mostly in Europe and in the U.S., though) we have formed Astronomers for Planet Earth.

In various events, I am speaking about the climate crisis from the astronomical perspective. Please see the list of my public talks.